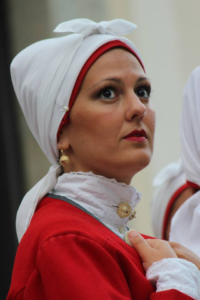 The painter Agostino Verani, that worked in Turin from 1793 to 1819, entirely reproduces a red custom in orbace,”the dye which was used for the dress was extracted from a lichen called “petra lana” or “alba tramuntana.” It is composed by the skirt, the jacket, white shirt and green corset, and a white handkerchief on the head knotted in particular way called “lu cenciu”.

Headgear – IL COPRICAPO
The female headgear that was used is called Cenciu, a particular headgear that was similar to that one worn by the inhabitants of La Maddalena. This headgear folden as a triangle, has to cover completely the head from the nape until the forehead. Lu Cenciu was knotted in different ways on a support constituted by a bonnet called Lu Scuffiottu.

The shirt – LA CAMIJA
The shirt for women, like that one for men, is white and made by linen or cotton. Generally, the shirt is very large with a gathered neck, from the junction of the sleeves until the cuffs. The neck usually consists of a thin strip of canvas hand-embroidered, in the neck is provided with two buttonhole at the end to make room for twin golden or silver; both the collar and the cuffs are carefully hand-embroidered.

The corset – L’IMBUSTU
In Tempio, as in the whole north of the island, a rigid bust without sleeves was part of the dress: it was very short and hardly arrived to the hips, and it was manufactured with various colors.

The Jacket – LU GJPPONI
Leonardo Gana says that it is a jacket very tight, made of silk or velvet that was used until 1700, but after considered out of fashion. For this reason, around 1800 il Gjpponi is made of wool or red velvet, large, open in the front with no bottons and the sleeves edged of blue. Under the jacket, women used to wear a green and golden corset.
Lu gjpponi has always been worn also by children.

The skirt – LA FALDETTA
The skirt is very long and wide. The upper part of the skirt, is open and it is closed with hooks or ribbons. The skirt of the red custom is heavier than the others, and it is made of red cloth with parallel folds from the waist. Along the final extremity, the skirt is enriched with a band of fabric very rafined of various colors or a single color, but it is carefully embroidered. In 1899 F. De Rosa says that the ordinary or daily skirt was made of dark red albagio. During the important feasts, was made of velvet very precious.
The ordinary skirt was called Suncurinu. The ladies, around the waist, wore a band whose fringes hung on the skirt.

The neckerchief – LA SPADDERA
It was a neckerchief made of tulle or canvans, folded diagonally which hung behind the neck and crossed on the chest and fixed to the belt.