The black costume of women 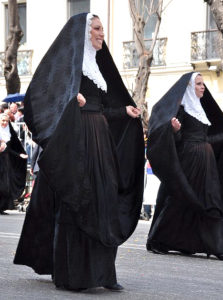 The black costume of women is date back to the first half of the 19th century.

It is entirely black of Damasked Silk. The main characteristic is the white lace that frames the face. The costume has an unusual skirt, called Cappitta or Faldetta Cupaltata, that it can be worn in two different ways. The same garment can be founded in the island of Malta and it is simply called Faldetta.

Initially it was wore as formal dress (influenced by the fashion of the Italian Continent) by an elevated social class, then it became the costume for all the commoners. This type of clothing has always been appreciated for its simplicity and for its elegance.

The women are dressed of dark, with a big veil of the same color of that which covers the breast and it encircles their face as the nuns.