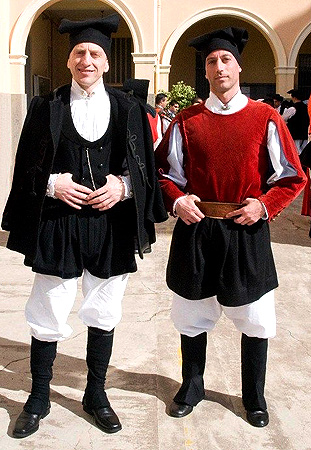 The male costume, today recognized as Sardinian traditional costume, represents the outcome of a long process of transformation which starts in the sixteenth and ends in the nineteenth century.

The XIX century produces an iconographic and textual testimony about the lifestyle and the costumes of Sardinian people. These testimonies make visible the various characteristic of the way to dress and clothing used mostly by the island populations, documents provided by weighted studies, reports and memories that different travelers, literary men and/or military, at the end of their travels, gave to the press in several cities such as Turin, Milan, Paris, London and other European cities.

About the male costume we can say that it is completely black, composed by the same clothes worn by all the men from other areas of Sardinia:

The Headgear – Berritta: It is shaped sack, with rounded edges, 40/50 cm long, black and red, made of orbace, cloth or velvet.

The Shirt – Camigja: it is very wide, white, the woven used for its shape was linen or cotton, with or without collar; when the shirt had the collar, a strip of about 10 cm, it was provided with two buttonhole at the end to make room for twin golden or silver that were also used to cuffs; both the collar and the cuffs were carefully hand-embroidered.

Man’s waistcoat – Canscju (gilet): it is sleeveless, button arrangement with one or double-breasted of cloth or smooth velvet, black but also red, it was worn on the shirt.

The jacket – Gipponi: this represents an alternative to man’s waistcoat, with red long-sleeved; generally made of cloth and/or velvet, with double-breasted closure on the front side. It could be garnished on the chest and sleeves with gold or silver buttons.

The trousers – Mutandoni: white color, very wide, and variable-length but at least below the knee, made of linen, cotton or orbace, they were worn with the lower ends tucked in the gaiters.

The Skirt – Gonnellinu (Ragas): black, made of cloth or orbace, and variable-length but predominantly short to mid-thigh, with a dense pleating in the waist; with a strip, passing between the groin, this strip joins the front and rear edges; It was worn over white trousers.

The gaiters (Li Ghetti): they are black made of orbace/cloth, open internally in the side, they are closed and secured below the knee by a black string, which can also continue to attach them to the calf, interweaving narrow from the knee to the bottom; They can be adorned at the top with a large velvet strip; inside the gaiters are inserted the “mutandoni”.

This male costume can be completed by:

Long coat – Gabbanu: it is long, wide and black, it equipped with large hood. The long coat is used to entirely cover the person sitting on horseback.